Dynamics of the Language (2 Volume Set)

Philosophy of the World of Words by: Devendra Nath Tiwari

Philosophy in this set of two volumes is a cognitive activity par excellence. Cognition is that the language expresses and it reveals intelligible objects/beings of language and the meaning to which our philosophical reflections, investigations, analysis and interpretation are not only based on but are confined to. The work is fit for satisfying the intellectual hunger of those who are sick of reading the same metaphysical, ontological, theological and epistemological descriptions in different books of history of philosophy, Indian and Western, to those searching a philosophy free from our captive thinking and also an innovative vision to meet out the new challenges in philosophy. Concentrating on cognition as it flashes by language the book analyses, discusses, interprets and critically argues most of the philosophical issues and their responses by Indian and Western philosophical traditions well conclusively.
Unlike linguistic and analytic philosophies, the book is a philosophy of language. Unlike meaning-centric philosophies popular in the East and West, the language-centric approach of the book is based on the expressive nature of language. Based on cognition as it flashes, on active theory of knowledge and action-oriented view of language and its meaning, it reflects on problems, doubts, paradoxes and queries for clarity and resolve, and on that basis, utility and future of philosophy as well.
Against philosophy as subjective and objective thinking, it is a cognitive reflection par excellence. These volumes cover the courses of philosophy prescribed in the universities and colleges useful for scholars and students and those who want a fresh perception to come up with the new challenges in philosophy.

SECTION II
Meaning Theories of the Heterodox Systems of Indian Philosophy, Russell’s Proposition,
Linguistic Analysis of Wittgenstein and Cognitive Holism
9. Indian Materialism (Carvaka) on Sabda as Authority: An Analysis of Tattvopaplavasimhah
The Problem
Philosophical Outlook of Indian: Materialism of Carvaka
Madhavacarya’s Perspective
Jayarasi’s Perspective
Refutation of the Theory that the Word Is Valid Source of Knowledge because of It Being Expresser
Comment
Refutation of the Theory that the Word Is Valid Source of Knowledge because of It Being the Expression of
Trustworthy Persons
Comments
Refutation of the Theory that the Vedas Are Valid Source of Knowledge because of They Being Unauthored
(Apauruseya)
Comments
Refutation of the Theorists that Accept Sabda as Valid Source of Knowledge because of It as Pointer to Intention (Vivaksa) as the Meaning
Comments
Refutation of Vaiyakaranas Who Hold Verbal-Cognition by Correct Form of the Word (Sadhupada-padartha)
Refutation of Sphota Theory of Vaiyakaranas
Refutation of the Arguments about the Definitioned Correctness of the Word
Refutation of the Arguments that the Use of the Word Creates Merit and Demerit
Comments
General Comments on Jayarasi’s Arguments for Refutation of Word (Sabda) as Valid Source of Knowledge
Comments 218
10. Jainas Theory of Language and Indescribability of Reality
The Problem
Relativistic Philosophy of the Jainism
Substance and the Logic of Syadvada
Sevenfold Judgements
Jainas Theory of Language as Representation/Reference and Knowledge
Knowledge and the Question of Describability
Conclusion
11. Apoha and the Meaning of Religious Ideas of Buddhism
The Problem
Is Language (Sabda) an Independent Source of Knowledge?
Reason Behind the Theory of Negation of Negation
Meaning as Constructed Identity
Theory of Apoha
Two Sorts of Reality and Two Categories of Sources of
Knowing Them: Is Apoha not a Third Category of Reality?
Language and Religious Experience
Meaning of Religious Ideas
Arguments Against Apoha
An Evaluation
Conclusion
12. A Critique of Bertrand Russell’s Concept of Proposition: An Indian Perspective
The Problem
What Is a Proposition According to Russell?
Sentence and the Proposition
Is Proposition the Meaning of a Sentence?
Propositions Are the Sort of Things that Can Be
Analysed and thus Have Parts
A Proposition Is Either True or False
Reason for Postulating the Notion of Proposition
First Argument
Second Argument
Third Argument
Proposition as a Unity
About the Meaning of a Word
What Is a Term?
The Problem of Empty Names
Distinction between Being and Existence
Nyaya View
Nyaya Position on Sentence
Vaiyakarana’s Position
Conclusion
13. A Critique of Ludwig Wittgenstein’s Linguistic Analysis: An Indian Perspective
Wittgenstein’s Problem of Philosophization in Investigations
Language and Representation
Conceptualization of Representation
Further Comments on Representation Theory
Linguistic Analysis: A Therapeutic Remedy
Meaning of the Word Is Its Use in a Sentence
Sentences Are Meaningful Only when They Are Used to Say Something
A Critique of the Concept and the Conception
The Problem about the Cognitive Ground of Contextual-meaning
Convention
Is Analysis of Language the Analysis of Thought?
Only Language Determinates Meaning Even in Case It Is Use
Cause of Identical Cognition of the Use
Conclusion
14. Analysing Language and Communication
The Problem
Is Intention Communicable?
What Do We Mean by Communication?
Conversation and Communication
The Cause of Incentive to the Production of Articulations
An Analysis of the Activities from the Speaker’s Side
An Analysis of Activities from the Audience Side
Production and Transmission of Articulate Utterances
A Critique of Chomsky’s View of Communication
Conclusion
15. The Nature of Language and the Logic of Translation and Analysis
The Problem
Three Models of Interpretation of Translation
Two Popular Logics of Translation
Critic of Matilal’s Observation on Translation
Problem of Good and Bad Translation
Response to Derrida’s Objection on Transcendental Signified
Nature of the Language and Analysis
An Examination of the Possibility of Analysis
Conclusion
16. Cognitive Holism: Cognitive Holistic Philosophy of Language and Its Practical Utility
The Problem
Difference between Knowledge and Cognition
Difference between Higher Knowledge and Pure Knowledge
Controversy over Potency of Language
Both the Word and the Sentence Are Expressers (Vacaka)
Non-difference of Language and Thought
Language as Expression vs Representation
Controversy between the Meaning-oriented and Language-oriented Views
Meaning and Convention
Are Intelligible Beings Abstractions?
Word Holism
Sphota Holism (Sphotavada)
Sentence Holism
Sentence Holism and the Logic of Propositions as Abstraction
Meaning Holism (Akhanḍavakyarthavada)
Holistic Interpretation of the Meaning of Negative Sentences
Cognitive Holism
Knowledge Is Determinate
Reason for Accepting Meaning as Universal
Practical Utility of Cognitive Holism
Cognitive Holism on Controversy of Disinterested vs Interested Knowledge
Holistic Philosophy of Relation
Thinking Philosophically Is Thinking Independently of Passionate Interests and Allegiances to Things and
Ideologies
Living One’s Own Life and Experiences
Remedial Uses of Cognitive Holism
Conclusion
Bibliography
Index

Devendra Nath Tiwari
Devendra Nath Tiwari, a Professor of Philosophy and Religion, BHU is a distinguished Indian philosopher. Having deep knowledge of texts of philosophy in Sanskrit, he is known for his originality in reflecting on problems. He is widely known for his dedication to promoting the cause of philosophy in India and abroad. As a member of research committee of Go Indian Project, he visited Gothenburg University, Sweden (2012) and served Visiting Professor on ICCR Chair of Sanskrit and Indian Philosophy, Mauritius (2014-17). He is a member of the editorial/advisory board of several Indian and foreign journals and has more than 130 papers published in reputed international and national journals of philosophy. As subject expert, he delivered more than 300 lectures in different universities. He has authored The Central Problems of Bhart¦hari’s Philosophy (2008); Language, Being and Cognition (2014 and modified edition 2021); and a set of two volumes on Dynamics of the Language: The Philosophy of the World of the Words (2017-18 and revised Indian edition 2021). He is one of the two editors of Environmental Ethics: Indian Perspective (2012) and was special editor for the spring issues of the journal of East–West Thought, (vol. 5, 2015 and vol. 8, 2018) on Indian philosophy and religion.
Books of Devendra Nath Tiwari 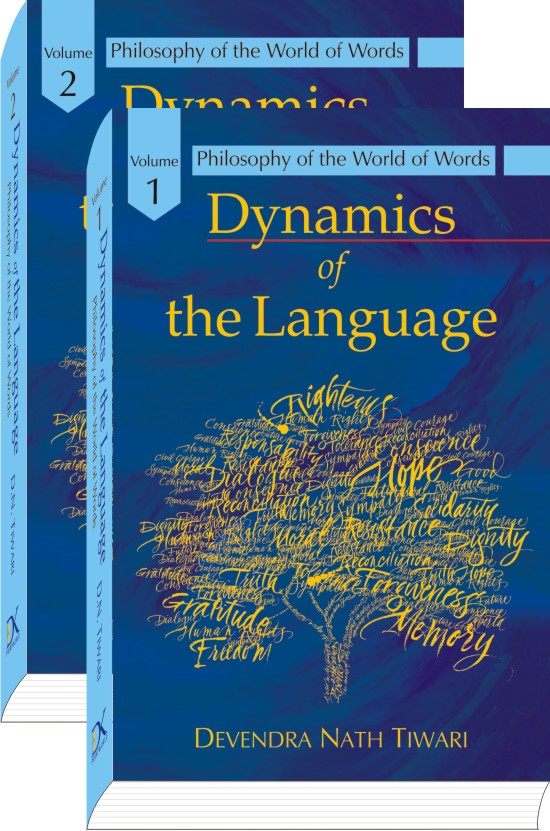