Universe that is God

An Insight into the Thousand Names of Lord Visnu by: I. Panduranga Rao

Studying the meaning and significance of Sri Visnu Sahasranama, the book discuss the metaphysical nuances of each name, related concepts/terms and the origin of the sacred hymn. It shows how the text presents a picturesque account of the Supreme Reality.

The book offers an erudite commentary on the sacred text of Shri Vishnu Sahasranama, one of the most important hymns in the great corpse of Indian literature. Dr. Panduranga Rao, a scholar of repute, here makes a detailed study of the meaning and significance of the hymn  a garland of thousand names of the Lord of the universe glorifying his qualities in an attempt to qualify the unqualified. Devoting a separate chapter for the analysis of each of the 107 verses of the stotra, he brings out the metaphysical nuances of each name with references from various sources and mentions the texts where the names occur. He explains related concepts and terms in an effort to present a wider understanding of the subject. He also studies the context in which the sacred hymn originated. The scholarly commentary reveals how the sacred text presents a picturesque account of the Supreme reality, Highest existence and Absolute bliss through graphic language and by adopting a photographic style of its own. The work, with a foreword by Dr. Karan Singh, will be extremely useful to all scholars of Indian tradition and literature as well as others who are interested in the recitation and understanding of Shri Vishnu Sahasranama.

Publishers Note
Foreword
Mine, but Not MIne
The Text and the Context
The Prologue
The Nascent Nine
The Eminent Eight
The Supreme Seven
All in All
The Best of All
The Master Mind
The Most Auspicious
The Very Breath of Life
The Excellence Unexcelled
Compassion All-Compassing
The Lord of All
The Soul of Equanimity
Holy Sound Dispels Fear
Blissful Blend of Radiance and Wisdom
Presiding Over, While Residing in
The Radiance Resplendent
The Gigantic Dwarf
The Supreme and the Superb
His Majesty
The Bow that Binds
The Splendour of the Resplendent
No Birth – No Death
The Light-House that Preaches
Direction from All Directions
The Synthesis of Day and Night
The Man, The Divine
The Bestower of Distinction
The Showers that Sustain
Valiant Vibrant and Radiant
The Light of Life
The Truth The Strength
The Dispenser of All Desires
Invisible, But Innumerable
The Beloved of the Blessed
The Main-Stay
The Grace that Condescends
The Lotus that Looks After
The Ever-Growing and the Ever-Lasting
The Incomparable
All-Enduring and Never-Decaying
The Spirit Behind Creation
The Grace that Grants
The Right and Might of the Lord
The Purusha Who Nourishes
The Prime-Mover of Time
The Source of All Resources
The Nave of All Constellations
The Object of All Worship
The Loving God
The Abode of Affection
The Guardian of Dharma
The Prime and the Supreme
The Tranquil Joy of Bliss
Victor, Rector and Protector
The Heart of Heaven and Earth
The Bliss and the Blissful
He Knows What he does
The Infinite Variety
The Unconquered
Bhagavan
He Gives What You Want
The Song, The Supreme
The Bestower of Peace
Nothing But Good
Shri the Treasure-House
The Bliss Unsurpassed
The Dispeller Of Grief
Arch Light
Lord of the Three Worlds
The Deity of Desires
The Learning of the Learned
The Greatness of the Great
Hymn the Lord and Have His Grace
Livable is Lovable
The One Existent
The Be-ness of all Beings
The Unmanifest in Myriad Forms
The One, But Not One
All Gold for the Golden God
Adored by all but Himself
The Bearer of Radiance
Four in One
Get the Best and Forget the Rest
Beauty and Duty Combined
The Living Looks of the Lord
The Lord of Lords of the World of Words
The Heaven on Earth
One With Trees
Fire and Fear of God
Just an Atom, But Gigantic
Extolled for his Excellence
The Sagittarian
The Abode of Truth and Righteousness
The Sun His Eye
The Pedestal of the World
Blissful Shower of Blessings
Valiant But not Violent
The Holy Name Will Do
The Good that Dispels Bad
Variety of Forms and Powers
The Being Without Beginning
The Smile that Blossoms
He Knows What He is
The Three With Three that Grows
He is Food, He is God
The Song that Sings for Him
The Great Grand Guardian
The Epilogue
The Text
Shri Vishnu Sahasranamavalih
Sanskrit Pronunciation Guide
Some other Works by the Author

I. Panduranga Rao
Dr. Panduranga Rao, scholar and philosopher, is respected for his unique understanding of deep philosophical truths concerning God and his creation. Brought into close association with Hindu ritualistic traditions and sacred works at a very young age, he combines the inspiration and dedication of a true devotee with the intellectual genius and preseverance of a scholar to explore in his works various aspects of Hindu philosophy and religion, particularly the Ramayana. A multi-linguist writer, he was around fifty publications to his credit.
Books of I. Panduranga Rao 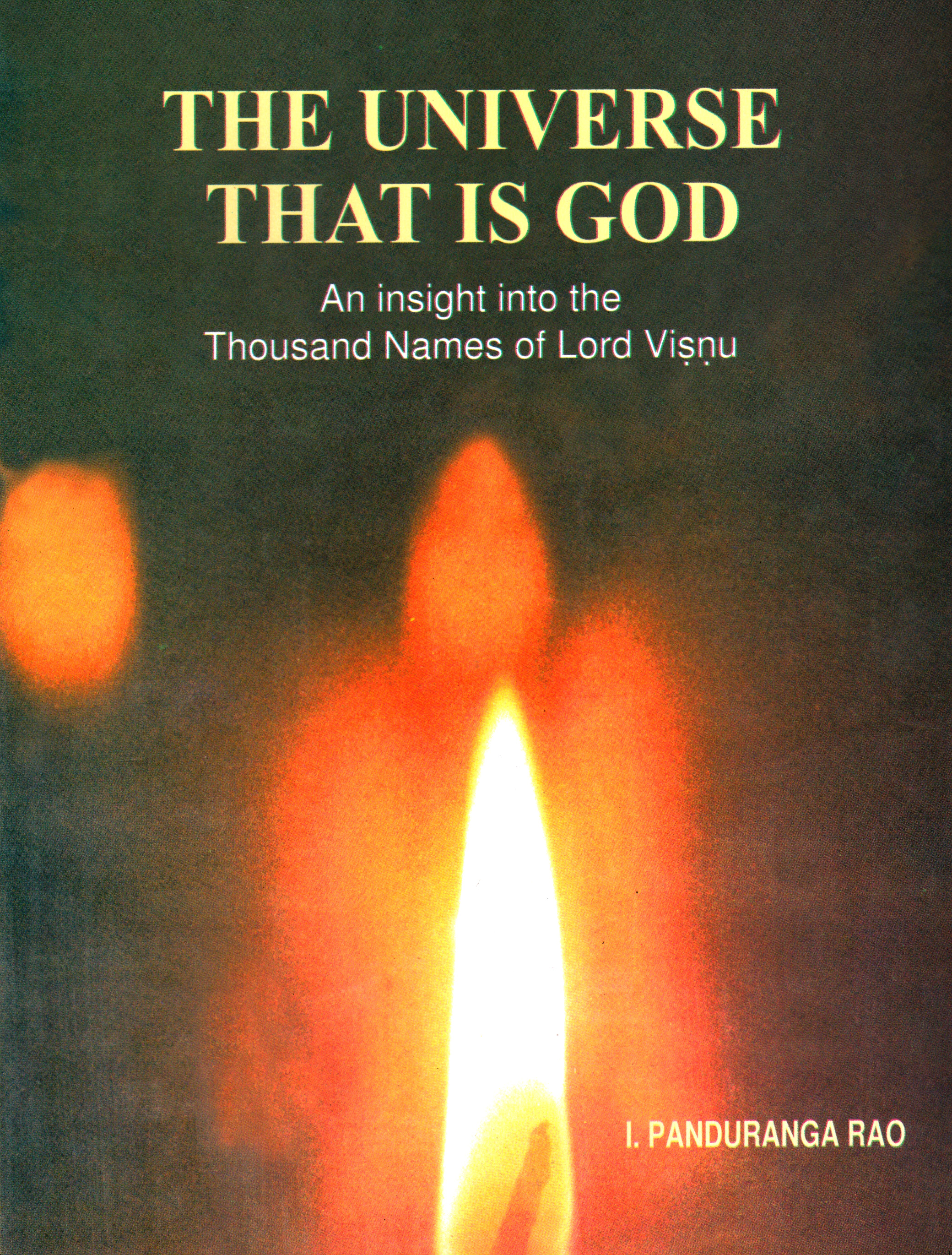