“The Paradox of Obligation “

and Other Conceptual Essays in Moral Philosophy by: Rajendra Prasad

The essays included in this book provide highly critical and creative analysis of some of the basic problems of normative and meta—ethies in a pleasantly readable language. They can be enjoyably and profitably read by technical philosophers as well as interested bymen. Professor Prasad writes on ethical issues as seminal, conceptual issues of moral philosophical, and not as issues arising out of some regional, Indian or non-Indian, instances of moral thinking. Even ethical issues, generally discussed as rooted in classical Indian thinking, have been discussed by him as basic ones of moral philosophising, and thereby he raises the status of some classical Indian views to a level at which their conceptual, general or non-regional, role becomes crystac clear, His writings by to bridge the gulf wrongly created by some others, between Indian and Western moral theorising.

Preface
1. On Wittgenstein’s Transcendental Ethics:
An Analysis
2. The Paradox of Obligation
3. Applying Ethics: Modes, Motives and Levels of
Commitment
Ethics and the World
Applicability of an Ethical Theory
Primacy of the Ethical
Ethics and Metaethics
Application and Motivation
Application and levels of Commitment
4. Man’s Timeless Dialogue with His God:
Another Recording
5. Promising as Obligating Their Fulfilment
6. Ordinary Language, the Fact of Our Having
a Responsibility, Responsibility’s Absolvers,
and Ability as Absolvers’ Absence
Ordinary Language as the Homeland of
the Concept of Responsibility
Ways of having a Responsibility
Being a Responsible Person
Being Responsible For
Intentionality and Agency
Responsibility and Ability: Ability as the
Absence of Conditions which Disallow
Undiluted Predication of “Responsible”
Responsibility and Duty
7. Formal Logic and the Autonomy of Ethics
8. On Identifying a Substantive Give and Take
between Philosophy and Science
Substantive Give and Take
Characterization of Substantive Give and Take
Preparatory Work for Facilitating Give and Take
Some Illustrations of Substantive Give and Take
9. The Gītā’s Theory of Action: A Secular–Analytic
Assessment
A Methodological Confession
Doing and Desiring (Intending): Some Basics
of Action Theory
The Gītā’s Pleading for Abnegation of Desires
The Gītā’s Pleading for Non-attachment to
Results of Actions
Non-attachment to Results of Desireful Actions
Implies Abnegation of Desireful Actions
(or all Actions)
10. Indian Democracy, Cultural Heritage and
Philosophical Progress
Democracy and People’s All-round Well-Being
Progress-making Philosophizing
Progressive vs Exegetical writing
Indian Practice of Democracy and
Its Use of Classical Heritag
Political Use of an Exegesis
Cultural Nationalism and Intellectual Integrity
11. Gandhi, Globalization and Quality of Life:
A Study in the Ethics of Development
Development Model and Quality of Life
Gandhian Model for India’s Development
by Making Villages Self-sustained
Concept of a Self-Sustained Village
Globalization and its likely Ethical Fallout
Globalization as Multilateral Trade
Globalization and Academics
Gandhian and Globalization Models placed
Face to Face
12. On Priding and Being Proud Of
Priding
Being Proud of and Being Proud
Hume’s Theory of Pride
Davidson’s Interpretation of Hume’s
Theory Explained and Commented On
13. Logical Rights in the Backdrop of General
Human Rights
Some Generalities of Human Rights
Logical Rights as only Humans’ Rights
Logical Rights: Illustrative Elaboration
14. Aurobindo on Reality as Value
15. Restoring to Education Its Natural Role
of Value-Inculcation: A Modest Proposal
Objectives
Content
Recipients
Social Reality
Methodology
Infrastructure
Achievement of Objectives through Normal
Routine
16. Patriotism Guided by Patriot’s Idea
of the Country Concerned
17. Luck, Desert and the Myth of Moral Luck
Some Commonalities of Things Attributed to
Luck
Generation of Desert
Fred Feldman’s Rejection of the Common-Sense
View: Discussed and Shown Untenable
Luck and Moral Assessment
Nagel’s Analysis of the Role of Moral Luck
Examined
Bibliography
Index Rajendra Prasad
1926
Rajendra Prasad, educated at Patna University and University of Michigan, retired from Indian Institute of Technology, Kanpur where he held the chair of the Senior Professor of Philosophy and Head, Department of Humanities and Social Sciences. He has been a Fulbright/Smit-Mundt Fellow, a Rockefeller Foundation Fellow, thrice a National Lecturer of the UGC, a National Lecturer and Senior Fellow of the ICPR and, until recently, a National Fellow of the latter. Professor Prasad has been General President of Indian Philosophical Association, Akhil Bharatiya Darsan Parishad, and Indian Philosophical Congress. His publications include Darshana Shastra Ki Ruparekha (Hindi), Regularity, Normativity and Rules of Language, Karma, Causation and Retributive Morality, Aesthetics, Morality and Jivanmukti, and Ends and Means in Private and Public Life (edited). Besides, he has published numerous scholarly papers in several learned journals in India and abroad. He has edited the journals Indian Review of Philosophy and Darsanika Traimasika, and is currently a co-editor of Indian Philosophical Quarterly and Paramarsa.
Books of Rajendra Prasad 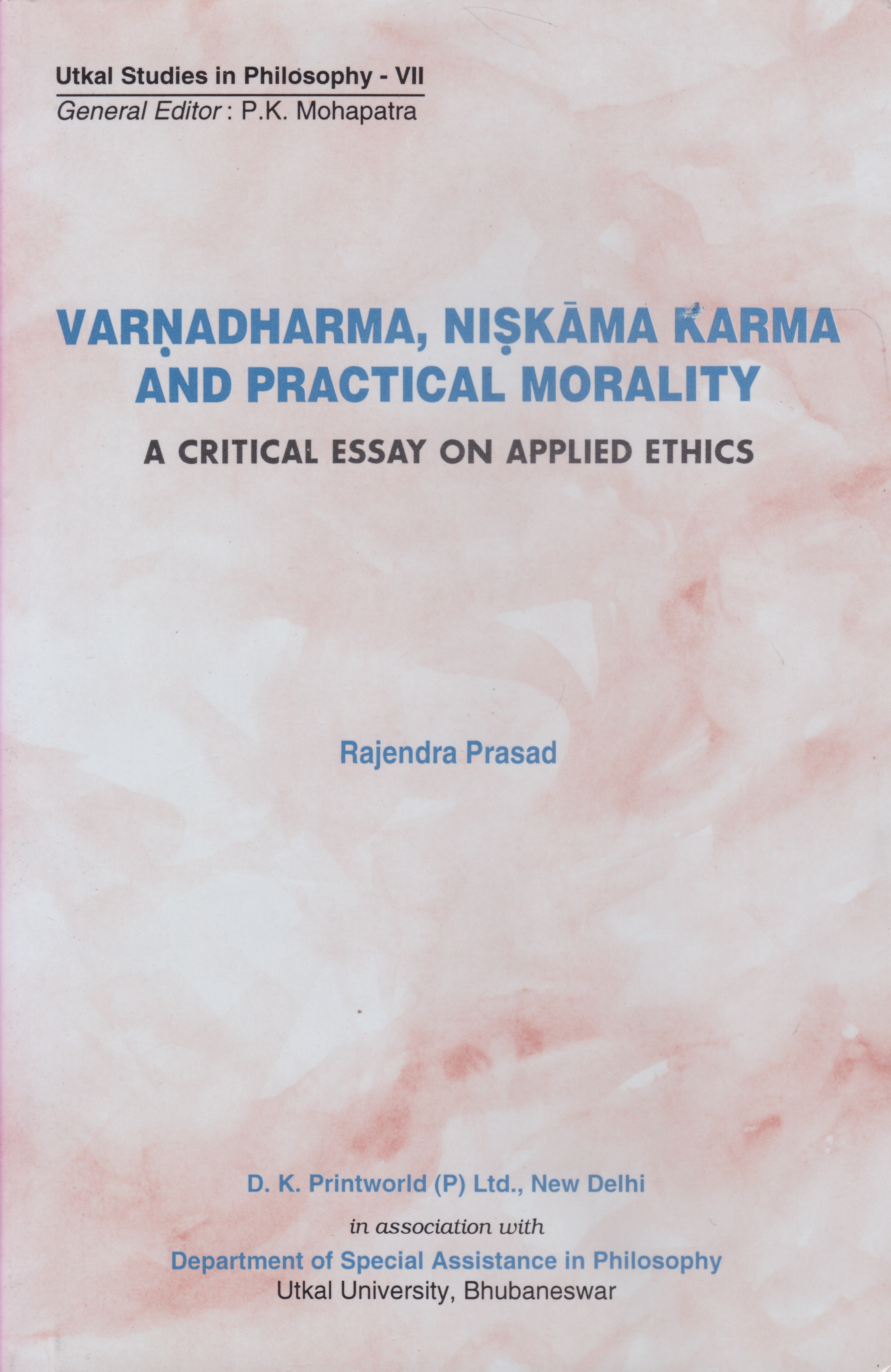 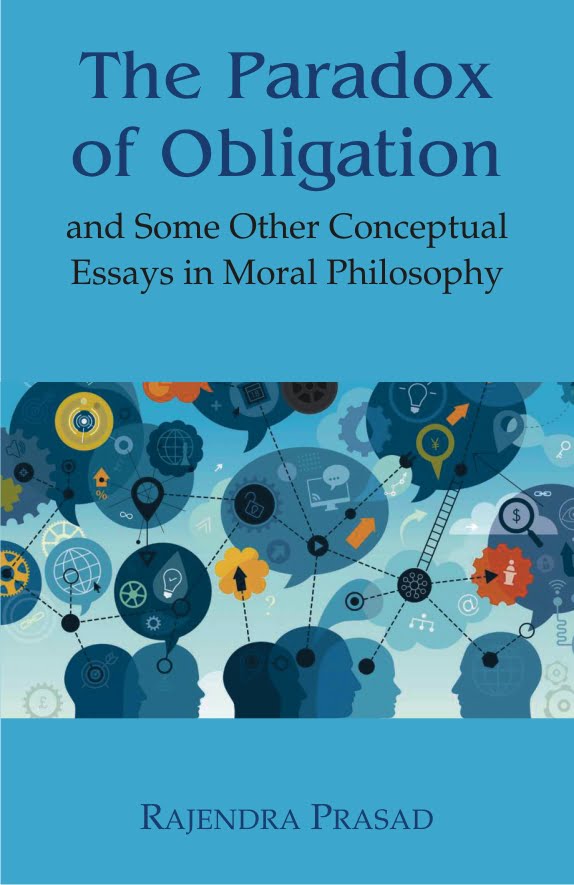 ““The Paradox of Obligation “” Cancel reply