It studies the historical progression of aesthetics  both Indian and Western  since ancient times, focussing on the landmarks in the course of its development and theories on art, beauty and related concepts.

When the 18th century German philosopher, A.G. Baumgarten first introduced Aesthetics as an academic discipline to deal with the philosophy of beauty, he couldnt possibly have anticipated the controversies that have lately been raised by logical positivists, analytical schools, and even linguists -controversies questioning the validity, the very legitimacy, of a philosophical inquiry into beauty, art and creative processes. Notwithstanding the relatively more recent usage of the term proper, Aesthetics has a millennia-long history: beginning, in the West, with the old-world Greek philosophers, like Pythagoras, Plato, and Aristotle; and, in India, with the Vedic writings, more specifically, Bharata. Dr. Shyamala Guptas book is indisputably a painstaking effort trying to chart the historical progression of aesthetics: both Indian and Western -with focus not only on its evolutionary landmarks, but on its important concepts and theories as well. Schematically structured into two parts, Part 1 of the book examines the status of Indian aesthetics: its theories of rasa and dhvani, and, besides these, of its world- view of art. In its Part 2 are traced the development ofWestern theories of art and beauty, together with their attendant issues appearing, from time to time: from the days of ancient Greek philosophers to contemporary thinkers. Additionally, the authoress also tries to show how art is positioned vis-a-vis morality, science, sport and culture. A comprehensive, meticulously updated perspective on aesthetics, the book is sure to interest anyone concerned with the discipline: whether as a specialist, a student or a general reader.

PART I
INDIAN AESTHETICS
1. Indian View About Aesthetics
Aesthetics as Saundarya Shastra
Viability of the Name Saundarya Shastra as Analogous to Aesthetics
Place of Beauty and Art in Vedic, Upanishadic and Other Literary Works
Reference to Art
Art, Aesthetics and the Theory of Rasa
2. Theory of Rasa and Dhvani
More Details About Natyashastra
The Theory of Rasa in the Context of Poetry
Poetics of Kavyashastra
Bhamaha — Alamkara School
Followers of Bhamaha — Udbhata and Rudrata
Rudrata
Riti School of Vamana
Dandin and Vamana: Schools of Guna and Riti
Lollata, Anandavardhana and Abhinavagupta
The Dhvani Theory of Dhvanikara and Anandavardhana
The Formulation of Dhvani Theory
Impact of Dhvani Theory on Later Poeticians
3. The Indian View of Art
Comparison Between Greek and Indian Art
The Trimurty in the Elephanta Cave
The Ardhanarishvara at Elephanta
The Dancing Nataraja at the Cidambaram Temple
PART II
WESTERN AESTHETICS
4. Introduction
5. Philosophical Aesthetics
Aesthetics: The Etymology and Evolution
Kant: Critique of Judgment
Aesthetics as Philosophy of Beauty and Art
The Contemporary Approach
Implications of Treating Aesthetics as a Philosophy of Art
Challenges to Aesthetics
Non-Philosophical Objections
Aesthetics and Art-History
The Artist and the Philosopher of Art
Philosophical Objections
Challenges to Aesthetics: Analytic Approach
6. Art and Beauty  The Concepts and their Relation
Beauty as an Aesthetic Predicate
Art as the Substratum of Beauty
What is Art
Relation of Art and Beauty
Beauty is an Attribute of Natural Objects Only
Beauty is an Attribute of Natural Objects as well as Visual Arts
Beauty is an Attribute of All Successful Works of Art
7. Work of Art
Composition of a Work of Art
8. Form and Content in a Work of Art
Meaning of Form and Content in Different Arts
Visual Arts
Architecture
Sculpture
Painting
Performing Arts
Controversy between Formalism and Representationism
9. Comparison of Arts
Fine Arts vs. Crafts
Pure and Applied Arts
Comparison of Fine Arts
Visual Arts
Painting and Photography
Photography
Literature as Art
Performing Arts
The Indian View of Dance
Drama and Cinema
The Traditional Drama — Drama on Television Screen — Radio Drama — Cinema as an Art — Nature of the Form and Medium of Cinema — Contents of Cinema
10. Traditional Theories of Art
Traditional Theories
Theory of Art as Imitation of Reality — Socrates and Plato — Critique of Theory of Imitation — Theory of Representationism — Representation Theory in Post-Aristotelean Era — Expression Theory of Art — Leo Tolstoy — Art as Communication of Emotions
Artist vs. The Works of Art
11. Contemporary Theories of Art
The Marxist Theory of Art
The Beginning
Pre-Revolution Theories
Karl Marx (1818-83) — Labriola — Plekhanov (1856-1918) — George Lukacs (1886-1971) — Lucien Goldmann (1913-1970)
The Hard-Core Marxist Views in the Post-Revolution Era
Marxism After Second World War
Contemporary Theories Of Art
The Challenges of Analytical and Linguistic Schools Regarding the Possibility of Defining Art and Generalisations About Art in General
The Institutional Theory of Art
M.C. Beardsley on Institutional Theory of Art
Existentialism and Phenomenalism
Phenomenalism
12. Art and Science
Pure Science and Applied Sciences
Applied Sciences and Applied Arts
Philosophy as Theoretical Knowledge and its Relation to Fine Arts
The Logical Distinction between Theoretical and Practical Activities
Art in the Age of Science And Technology
13. Art and Morality
14. Art and Sport
Commercialism In Art and Sport
Basic Differences Between Art and Sport
15. Aesthetic Experience
Source of Aesthetic Experience
Plato: Beauty Alone is the Source of Aesthetic Experience — Aristotle: Art as the Source of Aesthetic Experience — Hutcheson: Art and Beauty in Nature and Man-Made Objects as the Source of Aesthetic Experience — Clive Bell and Contemporary Thinkers: Art as the Source of Aesthetic Experience
Various Concepts of Aesthetic Experience
Disinterestedness — Nature of Aesthetic Experience — Criticism: Aesthetic Experience as a Myth
16. Aesthetic Attitude
Stolnitz: Aesthetic Attitude
Edward Bullough: Psychical Distance
George Dickie: Criticism of Theories of Aesthetic Attitude and Psychical Distance
Edward Bullough — Psychical Distance Dr. Saxenas Defence — Defence of Aesthetic — Attitude Theory of Stolnitz
17. Aesthetic Judgement
Aesthetic Judgements are Statements Made about the Appearances of the Physical Objects
Distinction between Positive Descriptive Propositions and Aesthetic Judgements
The Logical Status of Aesthetic Judgements
The Function of Aesthetic Judgement
The Role of a Common Man — The Role of the Art-Critic — The Role of the Philosopher — Comparison Between Moral Aesthetic Judgements
18. Epilogue — Art, Civilisation and Culture
What is Culture?
Civilisation and Culture
Art and Culture
Bibliography
Plates
Index

Shyamala Gupta
1931
Shyamala Gupta (b. August 1931) is Bombay University’s Ph.D. (Philosophy), with specialised interest in Aesthetics. And has been Research Fellow at the prestigious Indian Institute of Advanced Study, Shimla (1966-67). An untiring researcher and writer, she has published numerous papers in different journals and, in addition, has contributed as many as 27 articles to the 3-volume Marathi Encyclopaedia in Philosophy (published by MEP Council, Pune). Also, she has authored two books, namely, The Beautiful in Indian Arts, and Saundarya Tattvamimamsa (Hindi) -both prescribed by Delhi University for undergraduate-level students taking a course in aesthetics. Involved with the teaching of philosophy for well over three decades, Dr. Gupta retired, in 1996, as Reader from Kamla Nehru College, University of Delhi, Delhi.
Books of Shyamala Gupta 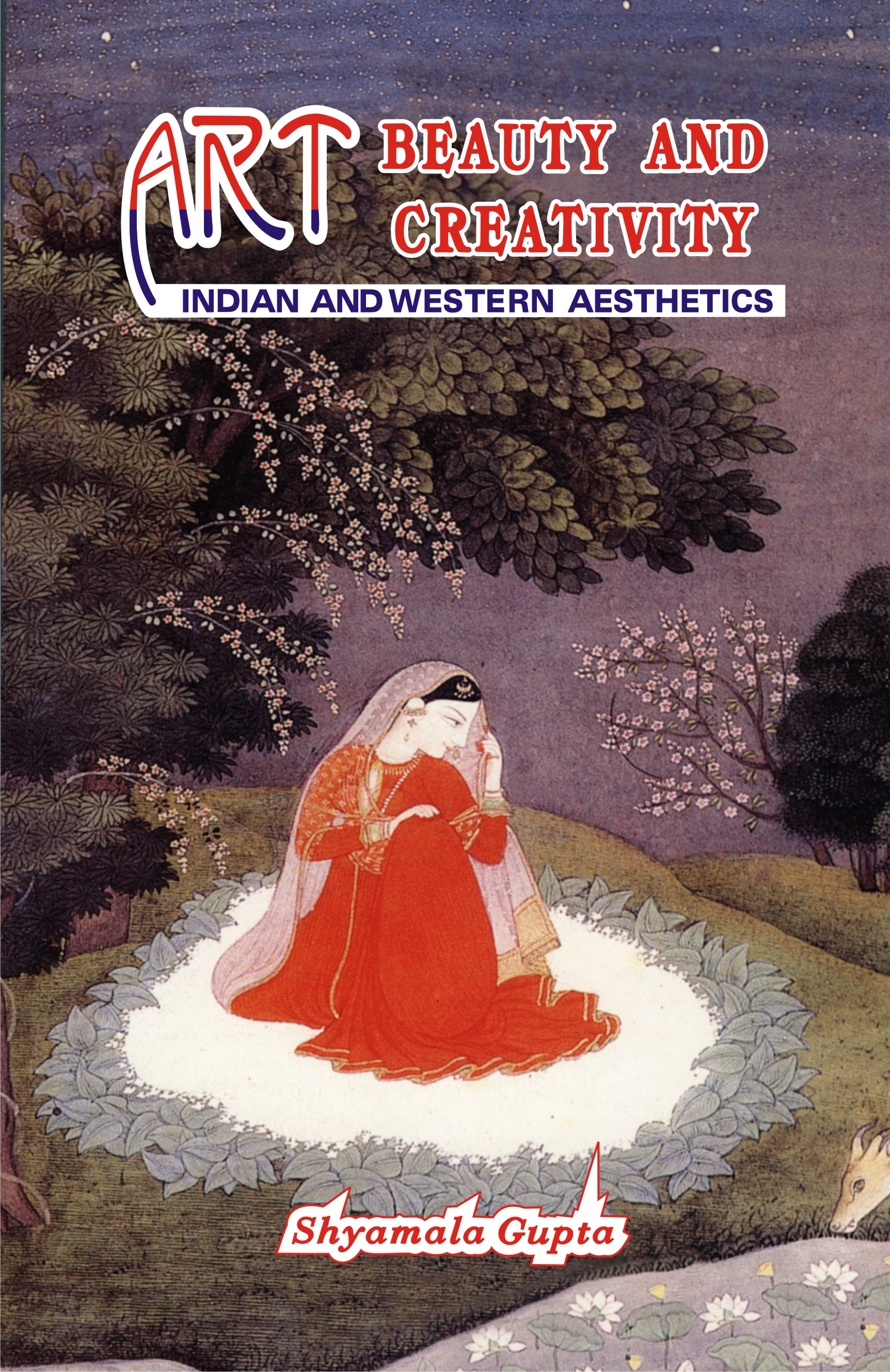